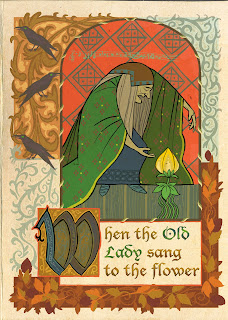 I was fortunate enough to work on Disney 50th animated feature, Tangled. For this film I was in the the layout department, however an opportunity arose early in production to help design the now abandoned storybook opening.  What follows are a couple samples of what the illuminated text pages could have looked like. Of course heavily influenced by Eyvind Earl's sleeping beauty work, I researched iconography that was tied to "middle European" illuminated text as it was that region that inspired the world and locations of Tangled.
Posted by Brian at 11:06 PM

Brian
Burbank, Ca, United States
I hope to share my learning experience with you and maybe even offer some inspiration as a way of giving back to the community of artists who have given so much to me.